Mr. R. H. Shepherd, secretary-manager of Denaby United F.C. considers that he has got together what promises to be the best collection of players the club has had for the past four seasons, and has already aroused the enthusiasm of the club followers. At the last annual meeting Mr. Shepherd promised those present that they would have a team to be proud of, and according to the list of signed players, he has kept his promise.

“We have great prospects” said Mr Shephard during the week-end “of experiencing a successful season. Players of experience have been secured and are looking forward to bringing back the old standard of football to Denaby Main. It is unfortunate for us that our two leaders of last season will be unable to assist us for some time. Frank Betts is resting and Les Williams, for whom we had an offer from Lincoln is at Reading. Then we have lost S. Cox, the 18 year-old left-back who joined us from Olympia Rangers towards the end of last season and gave every promise of developing into a first class back. He joined the Navy at the end of last season. Arsenal were interested in this lad and had he remained in the district he might eventually have reached Highbury. Apart from hoping to finish nearer the top of the Midland League than the bottom we are hoping for a good run in the English Cup”.

The management of the Denaby and Cadeby Collieries are also taking an interest in the club. They did not want to see Midland League football go out of Denaby, and towards the end of last season expressed their willingness to do their share by finding suitable work for players. This they have done, in addition to other things.

Following a complaint last season, the lighting system has been improved considerably, and the whole of the hot water system has been renewed, while general improvements are being made on the ground. The playing area looks better than ever.

The last line of defence has been placed in the hands of F.GIBSON, whose displays at Denaby while playing with Hull City have always been appreciated. He has also been with Middlesbrough.

It is almost a certainty that the two full-backs will be RON HAPPS and JACK WILLIAMS who will be in their third season together. Williams can play in any position in the defence area, but he prefers left-back. Towards the end of last season he distinguished himself at centre-half, a position of his schooldays. He has not played in the trial games, but it is hoped that his two weeks holiday at Bournemouth will put him in fine trim. Happ´s abilities are well known. Last season he was selected as reserve for the Midland League team v. the champions, the first Denaby player to receive such distinction. 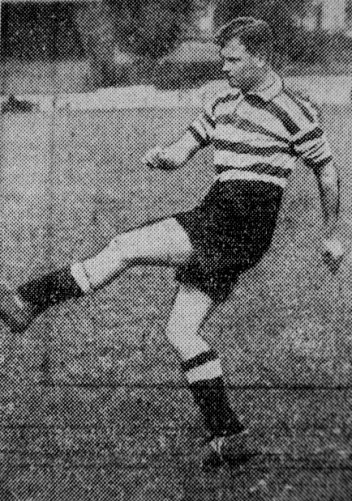 Foresaking a chance of winning a cup in the Denaby Junior League, W. FLETCHER threw in his lot with Denaby United towards the end of last season. As a right half-back he has played some sterling games with Denaby Billiards Hall and his appearances with the United revealed great possibilities. He is only 19, weighs 10st and stands 5ft 9ins. He will have an experienced centre-half in JACK WRIGHT (picture) playing alongside him. Wright comes to the club from Darlington where he made 28 appearances in the first team last season. Before joining Darlington he was with Derby County. In SaturdayÂ´s practice game he proved himself to be the right type of man for the position. On the left flank there will be W.CARR who came on Saturday from West Hartlepools. He has had the last two seasons with Southend United and before that he was a favourite at Huddersfield. He is considered to be Denaby´s biggest “capture”.

A player who took the eye of the spectators on Saturday was J. DAVIES an outside-right from Bradford P.A. and formerly with Wolverhampton. He is a tricky winger and possesses good ball control. A favourite in the days when Seth King captained Denaby, the side which made its way to Carlisle in the English Cup was A. BLACK, a diminutive inside-right. In the practice game on Saturday he showed how to get goals, scoring three. Since he left Denaby four seasons ago he has had a season with Barnsley, but an injury kept him out of the side for a long period, and the last two seasons he has spent with a Wombwell club. His display revealed that he has not lost any of his old form, so we can look forward t a touch of the old days. 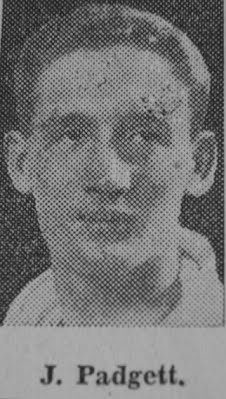 The inside -left position will probably be entrusted to J. PADGETT, who can play in either of the inside positions. He joins Denaby from Bradford P.A., and was previously with Bradford City. Playing with Bradford P.A. at Denaby last season, he scored four goals. G. GIBBS, who has played with HickletonÂ´s Yorkshire Council cricket side this season and is an outside-left, comes to Denaby via Folkstone, Leicester and Barnsley. Another outside-left to be signed is J. GUEST, a local player, who returns to the club from Frickley.

The thanks of the club go to those at Frickley for their kind remarks in last weekÂ´s issue of the “Times”, and they at Denaby wish them the best of luck during the coming season.

DenabyÂ´s first home fixture will be on Monday, September 4 th , when the visitors will be Newark. On the following Saturday, Bradford City Reserves will be at Denaby. In all, Denaby have four home fixtures during September.

The Sports Allocation Fund, to which the miners employed at the two collieries contribute 1d. per week, is under a new representative committee, with Mr. E.T. Hardy (chief engineer to the colliery company) as its chairman, and the reorganisation of thee fund has resulted in the football club having their grants slightly increased. The president of the football club is Mr. L.C. Hodges (Managing Director of the Colliery Company), while Messrs. N. Hulley and D. Cowburn (managers), Mr. C.J. Pickett (under-manager), Mr. B. H. Pickering (general manager), Major Leslie and Mr H Peake (directors), are all vice-presidents and show their interest in representing the colliery management. The chairman of the club is Mr. W, Linstead, and Mr. T.L. Jones enters upon his first year as financial secretary. The care of the ground is in the hands of Mr. Herbert Wilkinson, who is under the supervision of the Colliery Company,. The trainer is Mr. L. Moseley, who. Unfortunately, is at present recovering from an injury, but his place, for some time being , is being filled by his son, Mr. W. Mosely.

Another section at Tickhill Square doing its bit in helping the football club is the Supporters Club, whose efforts during the past few years have been more than appreciated by the football club.

At the final public practice on Saturday all but two of the signed players were on view. Two well-balanced sides were on the field, and play gave the impression that the club are in for a more successful year.