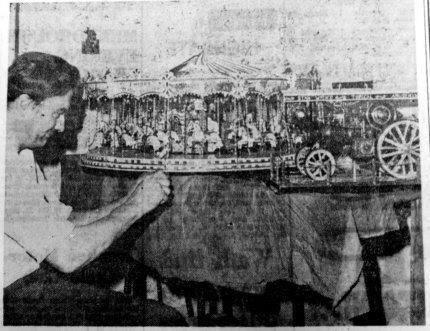 Mr Wren, of 5 Ravensfield Street, Denaby, won first prize in the model section of the South Yorkshire Traction Engine Clubs rally at Wilsic with his model of a fairground roundabout, complete with organ.

“It has taken thousands of hours over the past five years to build it,” said Mr Wren this week. “There are 380 pieces in it altogether, most of them hand carved and it takes between two and three hours to assemble it.”

Mr Wren, who is a member of the Traction Engine Club, has made modelling his hobby all his life, and in the past has constructed ships, locomotives, and a showmanÂ´s engine, which was to power the roundabout.

To build the trophy winning model Mr Wren spent some time at a local fairground, where he was given every facilities take all the measurements he wanted.

One time is spent six hours a day working on the model, and now intense construct some scale model lorries to pack it in.

Mr Wren would never consider selling any of his model, despite their obvious value.

“There is a lot of patience, enthusiasm, work and sentiment in them,” he said. “You can spend the money in a short time, but these are something which last.”