Denaby United F.C. werea football club that folded in 2002 following eviction from their ground by the Denaby & Cadeby Miners’ Welfare. The club were based in the Denaby Main Colliery Village, which is situated near Conisbrough in South Yorkshire.

While they were active, Denaby United were together for 107 years. Their most notable successes were reaching the FA Cup first round on two different occasions and being crowned champions of the Northern Counties East League Premier Division in the 1996-97 season.

The club was founded in 1895, and in their formative season became members of the Swinton and District League. Future Liverpool defender James Harrop, was an early face at the club. Seven years after foundation Denaby has achieved promotion into the Midland Football League, they had a measure of cup success in 1906 via winning the Sheffield and Hallamshire Senior Cup.

Mention should also be made of Frank Heppinstall who was an outside left who also played inside left for Woolwich Arsenal then of the First Division of the Football League in the 1909/10 season and briefly in the following season. In total he made 23 league appearances becoming a regular fixture in the latter half of his first season and the start of his second and final season.

He was born in South Hiendley in 1885 and started playing with Denaby United before moving to Barnsley, then back to Denaby, onto Swindon Town and then to Woolwich Arsenal.

After he left Woolwich he moved to Stalybridge Celtic and finally Hamilton Academical.

In the league at the time Sheffield Wednesday Reserves featured; when they visited the Recreation Ground to play Denaby United, the attendance record was set at 4000. In 1910, they captured the Sheffield Challenge Cup for the second time and began considerations into moving ground. Two years later they moved to The Tickhill Square, but a year later due to financial problems the club were forced to resign from the Midlands League.

Denaby United joined the Sheffield and District League and gained promotion back to the Midland League by 1921. They reached the First Round of the FA Cup in 1927 and set a new ground record at 5200 for the game against Southport. 1933 saw another win in the Sheffield Senior Cup, which they retained three years later. Wally Ardron, who later went on to become Nottingham Forest’s 3rd all-time top scorer played for Denaby United during the 1930s.

After World War II, Denaby United rejoined the Midlands League; Keith Burkinshaw played at the club during the 1950s, he would go on to manage Tottenham Hotspur to victory in the UEFA Cup and FA Cup years later. The Midland League itself folded in 1960, but was refounded after only one season, where Denaby managed to finish 5th. Around this period Denaby United set a large record, by beating Shirebrook Miners Welfare, 20-0.

The club spent the rest of the 1960s and the first half of the 1970s in the same league. They were briefly relegated to Division Two for the 1975-76, but were promoted with a 4th place finish. From 1977 till 1982, the club began to slide and after two relegations found themselves in the Yorkshire League Third Division.

In 1982 the Northern Counties East Football League was founded and Denaby United were admitted to the Division One South section. They gained promotion with a runners up spot, in 1983-84 just behind Borrowash Victoria. This meant the club were promoted to the Northern Counties East League Premier Division, which turned out to be the division they would stay in for the rest of their history.

In a space of five years during the late 80s and early 90s, Denaby United finished 3rd on three different occasions. Better was to come from the club in the 1996-97 season, when they were crowned champions of the Premier Division, despite this achievement they did not progress up the football pyramid into the Northern Premier League (which today is only three promotions away from the Football League Two) because of ground problems. 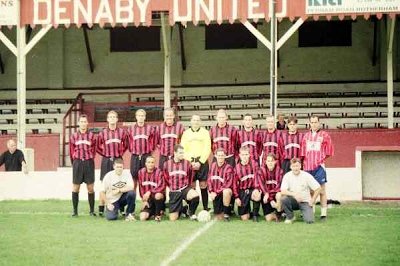 For the five seasons after being crowned champions they were unable to equal the feat. The club played their final game in 2002 against Arnold Town, in front of over 300 spectators at Tickhill Square, the game finished in a draw.

The reason the club was forced to close down was because of the Denaby and Cadeby Miners Welfare Scheme, who in September 2001 gave the club notice to leave their home ground. As the village is relatively small there was no suitable replacement ground for the club to play at.

Reportedly at the final game, Denaby United’s players stepped onto the pitch through a guard of honour, which was formed by away team players from Arnold Town accompanied by the song “You’ll Never Walk Alone.”

In its final years, under the editorship of David Green, the club produced one of the best Match Day Programmes at its level of football, winning a number of awards for the production, including the prestigious Wirral Programme Club award for the best Match day Programme outside the Football League in 1999, outranking the publications of all the clubs in the Football Conference, Northern Premier League and other leagues of similar status in the South and Midlands (see “Tyke Travels- a Guide to Non-League Football in Yorkshire”, Steven Penny, Penny for Your Sports Publications