When Denaby St. Alban´s Catholic Church Concert Parties are presenting one of their shows, Mrs. Annie Dolly, of Marr Street, Denaby, can always be found doing her best to make the entertainment go with a lively swing. And she is 67! Despite her age she can give some of her fellow actors and actresses a few points at the game. But Mrs. Dolly is the leader of a talented family. 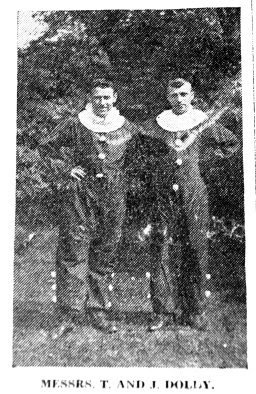 In fact the family has three generations all actively engaged in the church concert parties. There is Grandmother Dolly; her son, Mr. John Dolly, of Tickhill Street, a power in the men´s concert party; and his daughter, Miss Kathleen Dolly, of the Children of Mary’s concert party.

Grandmother Dolly has three daughters and one grand-daughter with her in the Married Women´s Party, two sons in the Men´s Party and five (and at one time six) grand-daughters in the Children of Mary´s troupe.

A native of Earlstown (Lancashire), Mrs. Dolly said in her home town they did not go in for concert parties much, but when she came to Denaby she was determined to open up a branch of activity which would provide funds for St. Alban´s Church. “I was the first person at St. Alban´s to organize a St. Patrick´s Ball which is one of our chief money raising efforts”, she explained, “and after the first ball in 1920 the organizers were able to hand about Â£50 over. In recognition of the efforts I had made on behalf of the church I was presented with a silver cup”.

“The first concert party was started at St. Alban´s about 12 years ago and we have had a production annually since”.

Mrs. DollyÂ´s sons, Messrs. John Dolly, a printer, and Tom Dolly, a minerÂ´s leader at Cadeby Main Colliery and secretary of the St. AlbanÂ´s branch of the Catholic Young MenÂ´s Society, have by their performances established quite a reputation for themselves, particularly among Catholic men of South Yorkshire. A Short time ago in a church concert at Denaby they brought the “house” down when they lampooned Hitler and Stalin in a wordy duel on the subject of the division of Poland.

Bigamy of a Denaby Hairdresser – The Parties in Tears