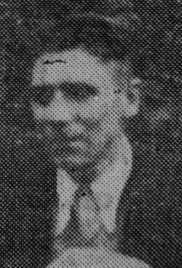 Here is a picture of Private Maurice Dunn, husband of Mrs. Dunn, of 65, Annerley Street, Denaby Main, who has received notification (as reported in our last issue) that he is a prisoner of war.

Private Dunn joined the Auxiliary Pioneer Corps. early this year, and later was sent to France.

No news of him had been received for over ten weeks.