Perhaps the most startling of all unpleasant contingencies is a fire alarm in the still small hours, when peace and repose spread over everything, when vitality is at its lowest ebb, and the nerves least prepared for the shock.

At least, that must have been the experience of Mr and Mrs G.H.Elliott, tenants of the Star Inn, Conisborough, early on Sunday morning, when they originally realised that the house was burning while they had slept, and when the household had to make its escape in night attire. The most terrible circumstances of a distressing affair was that the whole of the household did not escape, and that the fire claimed one victim. 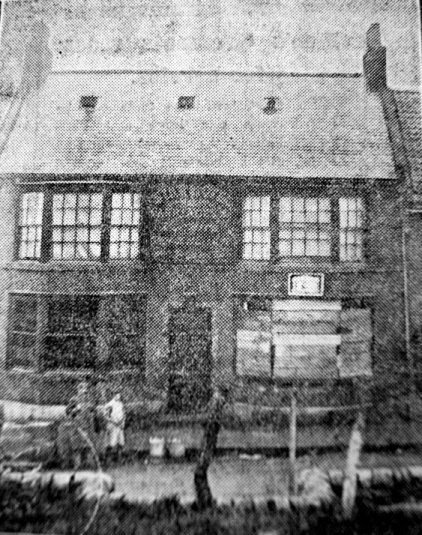 Front View of the Star Hotel.
The fire originated in the Room where the windows are boarded up.

The occupants consist of Mr and Mrs George Henry Elliott, their daughter Mabel, aged nine, who slept in the same room, and the sisters Emily and Margaret Evelyn Mountford, aged 20 and 14 respectively, who acted as domestic servants, and slept in the attic above.

Thanks, probably, to the fact that Mrs Elliott is a light sleeper, the whole house and family was saved from destruction. About half past two on Sunday morning she was roused from sleep by the sound of breaking glass. She realised that something was amiss, but her thoughts did not fly to fire, for when the house was closed at 10 o’clock everything seemed all right. She awoke her husband and told him she believed burglars were in the house. Mr Elliott at once went down to the narrow wooden stairs. At the bottom of the stairs was a door which opens on the passage to the front street, and upon the four ground rooms, the commercial room, tap room, in which is the bar, the “snug” or best room, and the kitchen. So as soon as Mr Elliott opened this door there was a rush of smoke and flame.

A strong draught was created, which blew the fanlight off the door, already weakened by the heat, clean to the top of the stairs behind it, and the smoke poured in upon Mr Elliott in volumes. Struggling against the suffocating fumes he managed to close the door, and to scramble back up the stairs to fresh air and comparative safety. His hair and eyebrows were singed with the heat and his face scorched. It is evident, in fact, that he had a narrow escape.

He at once gave the warning to his wife and to the girls upstairs. Then, as may be imagined, there was confusion. It was quite dark; there were no lights available, and the startled family roused from sleep to a full appreciation of their danger, were naturally terrified. Mr Elliott, however, tackle the situation coolly, and led the way through the billiard room, which is on the first floor, to an exit at the back, down some stone steps into the backyard and safety. It was then that the terrible discovery was made and that the child, Maggie Mountford, was left behind.

In the meantime Mrs Elliott, with her child in her arms, ran down to the house of Mr W. Jones, the captain of the Fire Brigade, a few yards away, roused him and told him of what was happening. At the same time Robert Wray, a passerby, ran to ring the fire bell and summon PC Lundy and PC Ransome to the spot. The two constables on discovering the state of things, made gallant efforts to rescue the missing girl. Lundy went in at the front door, and twice braved the heat and flames, but before he could reach the door down which the luckless child was (though he did not know she was there) he was driven back by the flames. 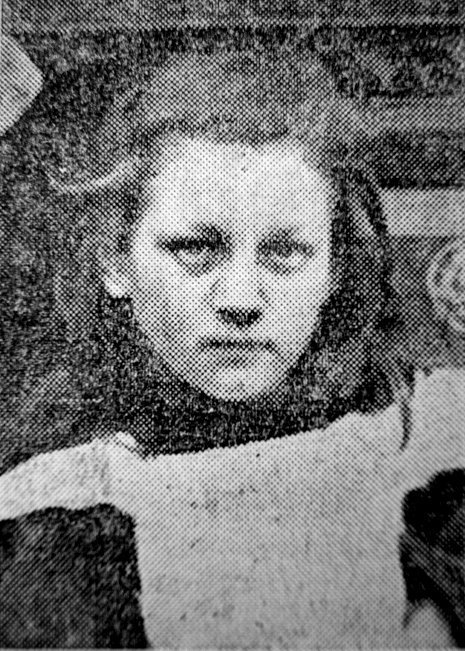 By now, some firemen were joining in the search, while others at the front were pouring thick streams into the commercial room – where the fire was fiercest. Still the missing girl was not to be found. The firemen searched all the upper chambers, which were untouched by the fire, and in which, it was presumed, that the girl, in a state of terror, would hide. There was not a sound, no cry or moan to guide the seekers.

The firemen had by 3:10 got the better of the flames, and it was possible to make search below. Firemen William Harrison was the first to go down the fatal stairs. At the bottom he made a shocking discovery. In a crouching position, with her hands grasping the woodwork and her face held tightly to the door was the lifeless body of the poor girl. Harrison picked up the form of what was but a minute or two before a young and healthy girl, and carried it tenderly up the stairs, believing at the time that there was life left. A second look, however, destroyed that hope. Death had evidently been due to suffocation and poisoning, for with the exception of one or two slight scalds on the face, probably caused by the water which the brigade poured into the place, the body bore no sign of burning.

The door which the child clung to bore thick rolls of paint and varnish, which had literally boiled out of the woodwork; and the fumes from this had no doubt quite as much to do with the girl’s death as had the suffocating influence of the smoke. It was painfully evident that the young girl, distraught with fear, and confused by the crackling of the flames, the smell of smoke, and the general terror prevailing, had taken a wrong turning, and instead of following her sister, who thought she was safely in front, had rushed down to the very door, which had almost been the death of Mr Elliott, and there fell, overcome by the fumes. She would be able to give no alarm not utter any cry to tell the distracted household of her whereabouts.

While the body was conveyed to the attic the firemen were doing their work smartly. By 3:15. the flames were practically subdued, but a minute or two later they were seen creeping through the ceiling of the passage, in one of the chambers upstairs. Their progress in this direction was properly checked, and by four o’clock all the danger was over. At seven o’clock the last firemen had disappeared.

The brigade had brought its new handcart, purchased by the Parish Council the day before, into requisition, and well served with a plentiful supply water from the mains, they did their work quickly and well.

Mr Jones gallant band, in fact, were to be congratulated upon their smartness and repeated efforts made at the rescue of the victim. They turned out quickly, and as quickly got to work, so that the flames were narrowly confined and the first floor of the house was practically untouched. For this the occupants of the house had not only to thank the brigade, but the stout nature of the construction of the house. Under so fierce a flame a modern house would probably have collapsed like a pack of cards. As it was, though the fire swept took everything perishable, it had to leave the walls blackened, but firm, and the plastering was of so sturdy a nature that the flames could not make headway in the upper story. This is another cause of self-congratulation for the family.

But though the damage might have been considerably greater, whata sight the old “Star” was on that cold, frosty Sunday morning when our representative went over the premises. The “Star,” the calling place in Race week for the racecourse by road, where the Sheffielder and the Rotherhamite would put up his horse, compare results at the races and have a friendly drink and chat before jogging homeward. Nothing was left on the ground floor but black walls, charred doors, the bulging bay windows back and front with jagged panes, and grey ashes on the floor.

In the commercial room, on the right hand side of the passage on entering from the Doncaster high road, could easily be seen the cause of the mischief. There a thin stone slab had served as the hearth stone, and round it a square yard or two of flooring was burnt away. Below could be seen the charred ends of the beam, which had originated the fire. The beam had no doubt been overheated by the fire above it, and, as in the case of the Mexborough Parish Church fire a year ago, had smouldered until it had reached the fresh air. The rest, from the fireÂ´s point of view was easy.

In the commercial room where the fire was certainly the fiercest, tables, chairs, forms, everything had been licked by the flames. Nothing was left of the piano, but the steel frame and a few twisted wires. The pictureshad vanished, and in their place the fire had worked weird designs in paint and varnish upon the blackened doors, as if in merry sport over the mischief it had done. 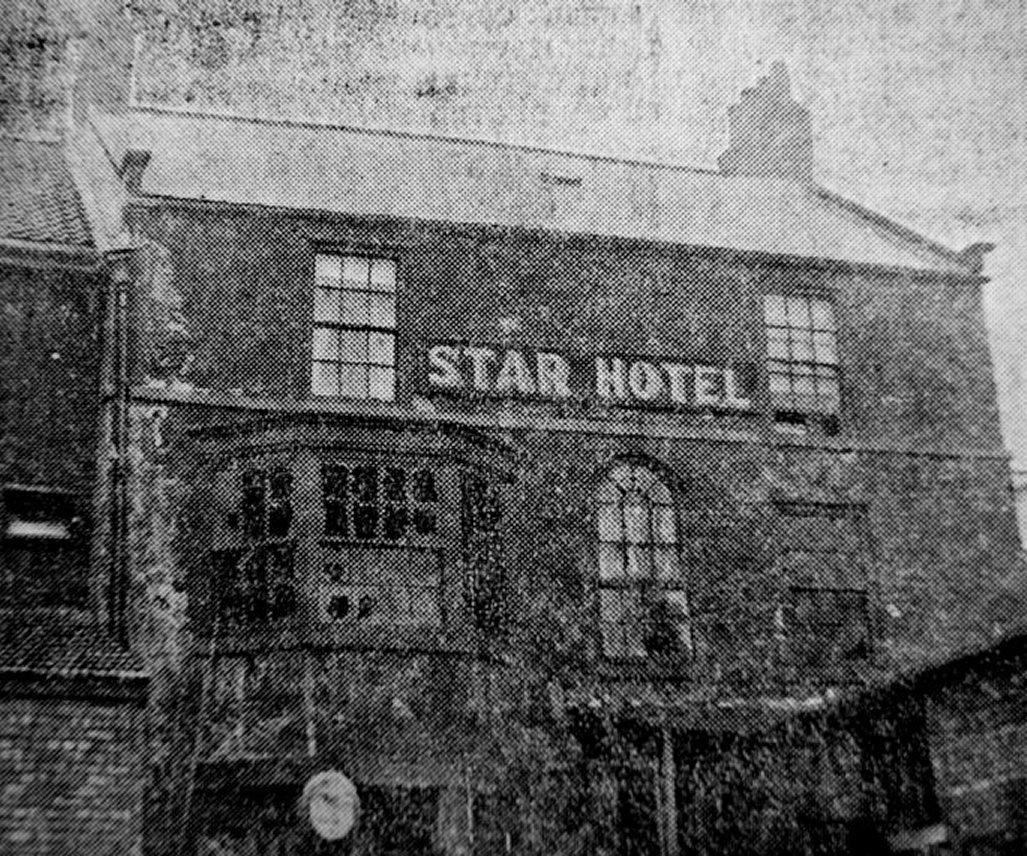 Curiously enough the heat of the fire stopped the big brown faced clock in the “snug” at 28 minutes past two; while in the tap room the clock stopped at 28 minutes to three. Yet comparatively little damage was done in the “snug” and the tap room got the full force of the outbreak. Lying between the best room and the kitchen was a little lavatory, in the very thick of the fire zone, which remained untouched, probably because the flames were diverted from it by draughts. The kitchen and the tap room were wiped out. In the bar, a row of decanters of whiskey were turned a chocolate brown. That was the prevailing hue. The fire got to a considerable stock of cigars, and drawn the corks of the barrels in the bar and turned the beer sour, while scarcely a square foot of glass was left whole.

The stock of beer in the cellar remained untouched and unspoiled, though the cellar itself was quickly flooded by the volumes of water which poured into it. In extinguishing the flames the Fire Brigade were rendered every assistance by the local police, under Sergeants Rawson and Hayes and superintendent Hickes and inspector Fairburn visited the place on Sunday morning, when the Divisional Coroner was warned of the sad happenings.

The house isof old fashioned construction, was evidently built as a cottage and used as a toll bar house, and unfortunately it is not a stranger to outbreaks of fire, though no previous conflagration has occasioned serious alarm. By Sunday’s fire Conisborough loses a not unpicturesque feature, for it is probable that messes Whitworth, Son and Nephew, in whom are vested the tenant rights, will cause the place to be rebuilt in modern style. Meanwhile the stabling accommodation is to be adopted for public purposes and a temporary license will be applied for. The damage done by the fire is estimated at something approaching £2,000.

Mr Elliott, after the excitement of the rush for safety, and the failure of the attempt to rescue the girl Maggie, felt the effects of his own unpleasant experience. The smoke and heat at first seriously affected his eyes, and even now they require to be treated with great care. He was unable by reason of the injury to his face and the shop to system, to attend the inquest held the subsequent day.

Maggie Mountford was one of four sisters who were in the service of the Elliott and Lowe familes.

Fire at the Star Hotel