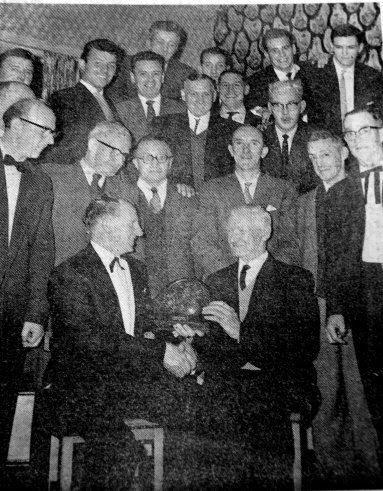 For the past 15 years, Mr Flaherty, who came to Denaby with his parents at the age of 11, from Rudsley, Staffordshire, has been a belt man at the colliery, but for the major part of his career worked on the coalface, like his brother, Mr Tom Flaherty, formerly of Firbeck Street, who moved back to Rudsley two years ago. Their father, Mr Harry Flaherty, also a well-known Denaby man and a miner at Cadeby, died some years ago.

The only breaking Mr FlahertyÂ´s 51 years service came during the First World War, when he joined the York and Lancaster Regiment for two years. He and his wife, Elsie were married 39 years ago, and lived in Tickhill Street for many years.

Mr Flaherty has four sons – George (23), left half for Yorkshire League side, Mexborough Town, Peter (18), a member of Conisbrough Northcliffe team who had spells with Doncaster Rovers, while Ted (39) playing with Notts County for a time. John (20) now works with Baker and Bessemer’s of Kilner’s.

Mr Flaherty is to be presented with a chiming clock from his colleagues at the colliery on Saturday evening. He was 61 on Thursday.