With Conisbrough’s historydating back to Medieval Times and withDenaby & Cadeby’s Coal Mining history it comes as little surprise that many reports of ghosts and paranormal activity are evidenced. In addition you can add a famous sighting of a UFO. Many thanks to Rotherham Ghosts.com for their reports. Their link is below, follow this for other South Yorkshire phenonimum

The ghost of a grey monk has been seen wandering among the ruined curtain walls. There is also the ghost of the “White Lady” who has been seen at the top of the keep, where she was pushed over the edge to her death.

Unknown footsteps have been heard in the keep. In addition, strange lights have been reported from the chapel section of the castle.

The link below is Rotherham Ghost’s investigationof the situation and italsoprovides you with a short tour of the Castle!

A short distance from St Peter’s Church in Conisbrough there stands an unusual old building which appears at first glance to be Georgian in origin. Further investigation into its architecture reveals that the old house, now a restaurant called Cromwells, has much earlier roots, and is believed to have been built during the 1600’s.

Throughout its history, the building has had many uses – as a farmhouse, a boarding school, a post office, and a community centre. In 1983 it was sold on to become what is today a licensed restaurant, although unfortunately a rather unexpected visitor from the past was handed down along with the deeds of the property, much to the surprise of the current staff!

Before recent alterations changed the interior of the building, the stairwell leading to the upstairs bar was next to a narrow passage. Chef Ian Godfrey recounted how one of the waiters was surprised one afternoon by a figure in a long cloak and a large hat with a feather, rushing past him as he made his way down the stairs. The figure, similar in appearance to a Cavalier, disappeared in an instant, leaving the waiter startled. It is perhaps no coincidence that an unseen hand has on occasion slammed the kitchen doors on unsuspecting staff, causing them to drop handfuls of plates.

Another local legend tells how one of the former occupants of the house in days of old was involved in an affair with a local man. When her husband found out, she is said to have hanged herself from one of the ceiling beams near the stairs. This area is close to the old coffee lounge, where strange atmospheres and icy coldness have been detected.

When renovations were taking place in 1989, an electrician was rewiring in the upper part of the building in semi-darkness. He was so convinced that a man had walked past him and disappeared that he dropped his tools and ran downstairs to confront his colleague, whom he suspected of playing tricks. Assured that this was not the case, the electrician then realised that the figure he saw had been wearing old-fashioned clothes, with sacking gaiters on his legs! The history of the building shows that it was used periodically as a working farmhouse for .more than two hundred years. The dress of the apparition would suggest that he was a land worker, and his appearance has been recorded on several occasions since.

The current landlord was preparing to close the premises at the end of a busy evening, when all except two of the guests had left the downstairs restaurant. Without warning, a huge gust of air ‘screeched’ past their heads and ‘banged’ into the wall close to the chimney. Although the sound was so loud that the remaining guests left in terror, nothing was physically seen, and no explanation could ever be offered.

Numerous sightings have been seen here on the cinder paths between Conisborough and St Albans Church Denaby. Here are 2 eye witness accounts:

Early one Autumn evening a boy riding his bike home stopped to ask a man the time has he rode his bike towards Denaby on the cinder path fearing that he was going to be late home. Only the figure to turn around and to the boys horror he had no face. The figure chased the boy right up until St Albans Church before he vanished from sight leaving the boy badly shaken.

In addition to this story, 2 girls were walking home one evening up the crags and noticed a man walking along the adjacent path, as the paths met the girls looked towards the man and were horrified to see that the man had no face.

These sightings have been going on for many years, the first story dates back to the 1920s and the second story was in 1994, it is believed there are many other unreported sightings of this strange spectral figure.

A young girl (know as the Mexborough Ragger) is said to have been walking through a tunnel taking water to the quarry when a train hit her. There is a archway in the tunnel wall, which you can sit in, then you say her name 3 times and she reappears walking through the tunnel. Only a few people have been in contact with the white lady.

On the 1st February 1915 Conisborough suffered an earthquake measuring 3 on the richter scale killing a young woman, up to date there has been numerous sightings of a white lady that is said to be her ghost. In addition to this, if you enter the caves down there, you will experience a time slip due to the quartz rock formations.

The area has had Coal Mining dating back several hundred years, so it comes as no surprise that one of Conisbrough’s best known spectres has been wandering the landscape for over a century.

In time of old, children were used underground as ‘trappers’, opening and closing wooden trap-doors to help air-circulation in the tunnels for the miners below ground. At the begining of each shift they would be issued with a small piece of candle, and when this burned out, they continued working in total darkness. A spectre known as the Lantern Boy was believed to be the spirit of such a trapper, who had died in a tragic accident underground in the 1800’s.

Until the middle of the 20th century, sightings of the Lantern Boy were quite commonplace in and around isolated areas of Conisbrough. The ghost was last seen around 1945 by a young man who was walkingnear the crags between Conisbrough & Denaby, close to the cemetary. He described the spirit as wearing tattered clothes and carrying a bright light.

This alley is between St Peters church and the Terrace. The story is that if you walk half way down the alley at midnight on a full moon and spin around anti clockwise 3 times and repeating `Satan stroke my backÂ´ the devil himself will appear and give chase to the end of the alley.

Many sightings have been seen around this area, including a woman in white walking up the fairway. This area is also rumoured to be a place for pagan rituals. Many of the old building around this area are also believed to be haunted 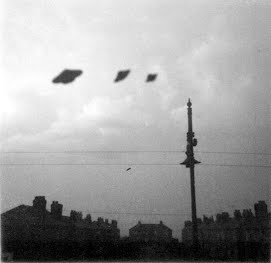 Stephen and his mother were returning home from a local fish and chip shop when Stephens mother noticed a strange orange light in the sky as they reached Leslie Avenue, they kept the strange light in view until it became stationary in the twilight sky. Stephens mother Mrs Therese Pratt sent Stephen into the house to get everyone out to see the unusual glowing object, the family came out to join Mrs Pratt on the street whilst Stephen was sent inside yet again to get the families Kodak instamatic 50 camera, the camera was a cartridge loading type set for cloudy. Soon after the photograph was taken, the UFO shot off at fantastic speed. The strange thing is that although only one object was observed that night, the negative showed three UFOs in formation.

There were other witnesses to the event but sadly they refused to comment leaving the Pratt family to face the media frenzy alone. Over the years the family have undergone sceptical leg pulling and false accusation, nonetheless the Pratt family stand by the validity of the account and photograph and continue to do so to this day.