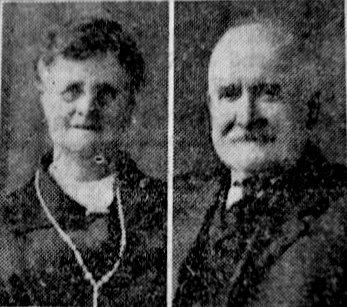 Mr. and Mrs Arthur Lewis, of 42, Westwood Row, High Green, recently celebrated were married 50 years ago, at the Sheffield Parish Church and have resided at Westwood Row for the past 48 years. Prior to retiring from work, about two years ago, Mr. Lewis worked as a miner for Messrs. Newton, Chamber and Co. for 48 years.

Mr. Lewis was born at Conisborough, and is now 73. Mrs. Lewis is five years his junior, and was their married life they have been blessed with 15 children, eight of whom are still living – two sons and six daughters. They have also 31 grandchildren living.

Mr. Lewis remembers the Sheffield Flood quite vividly. He recalls that five pigs were floated down the river as far as Kilnhurst, where they were dragged out of the water, Their throats were cut. They were then scraped and opened, and then they were hung on trees. Later they were taken down, cut up and eaten. Mr Lewis also referred to working in a pit in the Rotherham district before he attained manhood. His mother did not like the idea of him working at the colliery in question, and she persuaded him to give in his notice to leave.

This proved very fortunate for Mr. Lewis, for a few days after his notice was up and he had left, an explosion took place, and the collier he had worked with was one of the victims.