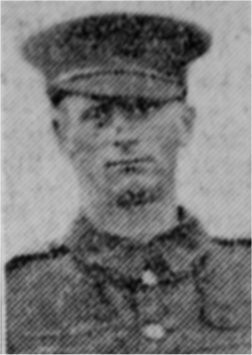 News has been received by Mrs J Hall of Clement Terrace, that her husband, private James Hall of the K.O.Y.L.I.was killed in action on 4 July.

He was 31 years of age and a coal miner by trade, been employed at the Yorkshire Main, Edlington before he enlisted in October 1914. He had been 11 months in France.

He leaves a widow and two children.

Mrs Hall has received two letters from company quartermaster Sgt H.Livesey, in the sad intelligence, and from these it appears that private Hall was hit by a piece of shrapnel and died instantly.

“He died a British hero, facing the foe to the last,” writes the NCO. In another letter he says: “the death of your husband is a big loss to our company. He was a good soldier, and a continual hard worker, never fearing what ever dangerous task he was put to.

Private Hall had a brother, private Richard Hall (A.S.C.), who, after serving in France and Salonika, is now in hospital in Malta, with dysentery. He lived with his parents at 50, Cliff view, Denaby main.

He also had two brothers-in-law serving; Private John Collingham(K.O.Y.L.I.) of 50 Cliff view, Denaby and formerly of Roman Terrace, Swinton, has been invalided from the front with frostbite, and is now stationed at Pontefract.

The other brother-in-law, gunner Ernest Hutchinson (R.F.A.) of Athelstone road Conisbrough, is in France.