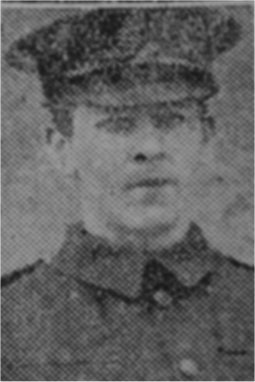 Mrs Hardy of 4 Melton View, received official news on Saturday of the death of her husband.

“I am sorry to inform you that your husband has today died in hospital from wounds received whilst performing his duty. He was struck by a piece of shell and immediately ran to me. The Doctor attended to him at once, and he was sent to hospital in a motor ambulance, but died about an hour after reaching their.

He was in no pain at any time, and seemed partly conscious. We buried him last evening in a soldier’s graveyard, on a hillside overlooking the battery position where we now have been for some months.

His comrades carried him into the grave. I am having a oak cross put up.

He has been my servant ever since we both joined the battery, and I always found him cheerful, willing and thoroughly trustworthy. He was a good servant and a good soldier; a great favourite with all the officers and men. I can assure you that the battery extend their deepest sympathy to yourself and your little girl.”