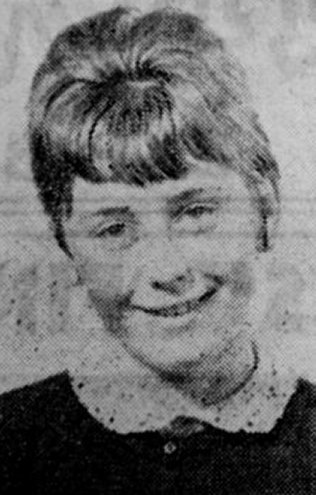 14 years old, Kathleen Davies sat alone watching television, unaware of the intruder was ransacking a bedroom at Conisbrough home, but when she went upstairs to fetch her pyjamas she was struck a violent blow in the face.

She ran to the next-door neighbour in Otley Close, Windmill Estate, with her clothes soaked with blood.

It happened last Thursday – only minutes after Kathleen’s father, Mr Albert Davies, and her brother had left the house. A lightweight telescopic ladder was left leaning against the back wall.

Kathleen, a student at Conisbrough Northcliffe High School, told the “South Yorkshire Times”, “It was terrifying. I was watching the television I heard a sort of rustling noise outside but I thought it was justthe wind,and onthe television the `SaintÂ´ program, Simon Templarhad just started talking to someone about breaking into a house when I broke off to go upstairs for my pyjamas.

I just opened the bedroom door when someone came from behind the door and hit me in the face. I just stood there with my nose bleeding. Whoever it was went past me and into another bedroom.”

Commented Mrs Kathleen Davies (40), who is employed at Conisbrough hospital, “The intruder had gone through all the drawers in our bedroom, but nothing was taken. There was no need to hurt Kathleen a blow like that could have been far more serious.

Neighbour Mr Cyril Wood (57) a commission agent, told how the frightened girl hammered on his door.

“Kathleen was holding a towel to her face and it was soaked with blood. She was nearly in a state of collapse. The first thing she said was `get my dad…´ It was some time before she could tell me what had happened.

“I was also watching television and did not hear a thing. A person who would attack a young girl like that is worse than despicable. My first thoughts were for Kathleen, but after I rang the police I picked up a poker, and went outside.

“I gave the poker to another passerby, a man whom I know well and went through every room, but whoever it was, had made a quick getaway.”

Kathleen, who escaped with a bruised cheek and blackeye, added that both doors were locked. Her father was at the Windmill Estate Youth Club, only a couple of hundred yards from their home.

Added Mr Wood, “at first I thought the intruderhad jumped out of the window, but then we saw the ladder. It was the sort which would be easy to carry around.”

Conisbrough House is Allergic to TV.