My name is Louisa Alice Cortes nee Reynolds and I live in Perth, Western Australia. My father was Frank Reynolds born 1908 Mexborough.

I’ve been trying for a while to find out what happened to my grandfather Walter Reynolds born Kimberworth 1880, after the death of my grandmother Louisa nee Holling in 1913

Unfortunately I have never lived in Yorkshire, or brought up with my father around, so my knowledge of the Yorkshire folk has been very limited, and I began my research years after my Dad had passed away. I’ve never really given up searching, and posted a few messages through the years on several Family History sites.

A couple of months ago I was going over some BMD certificates and I found my Great Grandmother’s death cert (Harriet) where the informant was a W Reynolds (It could have been brother William) Britain St, Mexborough, and since then I have found a marriage that took place between a Walter Reynolds and Ethel Thompson in 1916 (I’ve sent away for the Marriage Cert).

Researching further, I found some children of this marriage, and one of them was Alan Reynolds, registration born June Quarter 1927 Doncaster. Today, I googled his name, and to my great surprise, Alan Reynolds, the poet, and born 1927,( and the biggest clue) Briton or Britain St, Mexborough came up.

I think I’ve hit the Jackpot, and Alan Reynolds is my Uncle. Hoping he is still alive and well, could you please get in touch with him for me, as I would dearly love for him or his family, to tell me stories of Walter and his second family, that is if I’m not mistaken, and he is family.

P.S I think your site is great and have to really have a good look.

Thanks for your email. This is one of the brilliant benefits of the site.

I have copied your email to Keith Butcher who is the caretaker of The Conisbrough Secondary School (De Warren Academy) and who gave me the poems in the first place.

I am sure he will get you a response from Alan, who I hope is still alive.

My name his Keith Butcher.

Alan Reynolds is a very good friend of mine and still alive and kicking at 82 years I will give him a copy of the email you sent Jim Beachill so he can read it and recognise the names which no doubt he will. In the meantime I will see Alan get his phone number and address so you can contact him or he can contact you soon as I finish work I will go to see him.

Good to hear from you Keith, and thank you so much for going to all this trouble for me.

I’m attaching a photo taken in England, during the war. There’s my father Frank, myself, and my mother Angela. My parents met around 1935 when my father was stationed in Gibraltar- My mother being a Gibraltarian young lady of around 18. They married August 1939, and I was born May 1940. I was named after my deceased Grandmother Louisa, and her sister Alice, who brought up the boys after Louisa’s death.

I’m telling you all this Keith, just in case Alan was not in the know of things, because I seem to have been kept in the dark as far as the Reynolds rellis go, or should I say went.

Best regards to you too Keith, 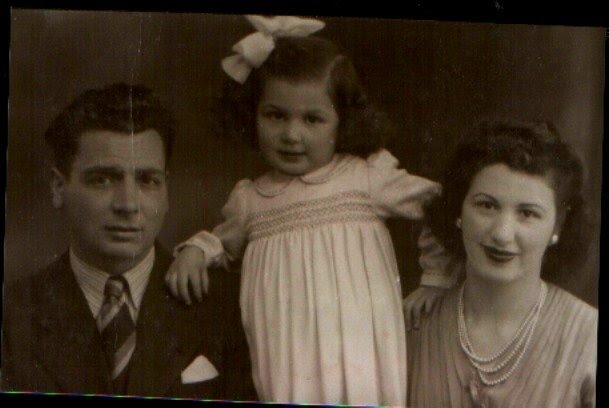