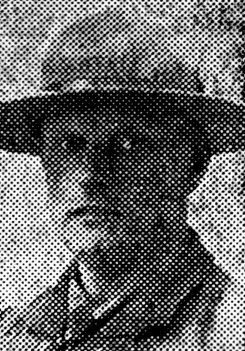 Many Conisborough folk, particularly his Scouting and Girl Guide friends, will hear with regret that the township will soon be losing the Rev. P. T. Hutchison, resident minister of the Wesley Methodist Church for the past four years, but they will join with us in congratulating him on his preferment to the position of superintendent minister of the Holbeach Circuit in Lincolnshire.

Mr. Hutchison, whose quiet personality has made a deep impression in this district, is leaving at the end of August and will preach his farewell sermons on august 25 th .

He will best be remembered at Conisborough for his lively interest in the Scout movement an interest which now covers 26 years devoted service, and not a small part of the revival of Scouting in the area has been due to his leadership, enthusiasm and drive.

Prior to coming to Conisborough he was for four years in the Wath-on-Dearne Methodist Circuit at Hoyland, and in nearly all the circuits with which he has been associated he has formed Scout troops and Girl Guide companies.

He began in 1914 by becoming an Assistant Scoutmaster in the 3 rd Shetland (Sandwick) Troop and though no Scouting was possible during his subsequent five years in H.M.Forces except for a very short period in the Army of the Rhine, he entered with vigour into the movement immediately he returned to ordinary civil life. He founded troops in Banffshire, Newbiggin, Choppington, Earrington, the Vale of Mowbray, Ilminster and at Hoyland before his arrival here.

In 1927 he gained the much coveted Gilwell Scarf and four years ago he received from the Chief Scout (Lord Baden Powell) the Medal of Merit for distinguished service to the movement.

The following year he was appointed Commissioner for the then newly-formed Mexborough and District Boy Scouts Association and he has been a familiar figure on the roads of the district with his bicycle flying a green Scout flag. With Mr. Hutchison who during his stay in the area has also had the supervision of the Balby Alder Grove, Braithwell, Sprotborough Park and Wadworth churches, will go from Station Road his mother and his sister, both of whom have assisted him in his church life.

They all hail from the Shetland Isles.

He will be succeeded by the Rev. W. Thynne, who comes from Holmfirth.