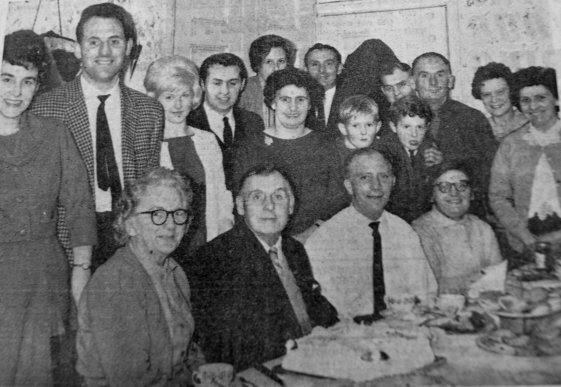 Mr & Mrs Shepard with friends at their Golden Wedding Party

Mr and Mrs Tom Shephard, 31 Bolton Street, Denaby, will have been married 50 years on Saturday and will be having a quiet family party at their home.

They have had nine children and eight survive – five sons and three daughters. There are nine grandchildren.

Until ill-health overtook them, both Mr and Mrs Shephard lived an active life.

Mrs Shephard was born in Denaby, and has lived in the village for about 60 years.

He served on Conisbrough Council from 1934 to 1945 and was chairman in 1939 to 40. His other activities are included chairmanship, secretaryship and treasurer ship of the local Labour Party, chairmanship of Denaby United Football Club and four years membership of the committee of the Cricket Club.

He has been Chairman and Delegate for the national Union of Mineworkers branch, President and Secretary of Denaby Main Colliery Checkweigh Fund, and for a period. He also served on the Board of Management of Denaby Main Corporative Society.