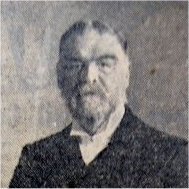 A well-known and highly respected resident has been removed from Conisbrough by the death of Mr George Harrison, which took place at his home in West Street, Conisbrough on Saturday, at the age of 69.

The deceased succeeded his father as chemist and postmaster at Conisbrough 50 years ago and also acted as Klerk and attendance officer to the old school board. In addition he was connected with the firm of Nowill, cutlers of Sheffield, and had a lifelong connection with Sunday school work in the parish. His father was the first to sell postage stamps in Conisbrough and his grandfather, the reverent G Harrison was assistant curator at Eccles sold church being elected a deacon in 1811.

The deceased leaves a family of four sons and six daughters to mourn his loss. For several years past deceased had been occupied for the station and newsagent, and had an extensive round.

He was a staunch conservative, and never hesitated to express his opinions. No more was better versed in the local history of the parish, which he had been associated with from his youth upwards. In many ways deceased was an original personality.