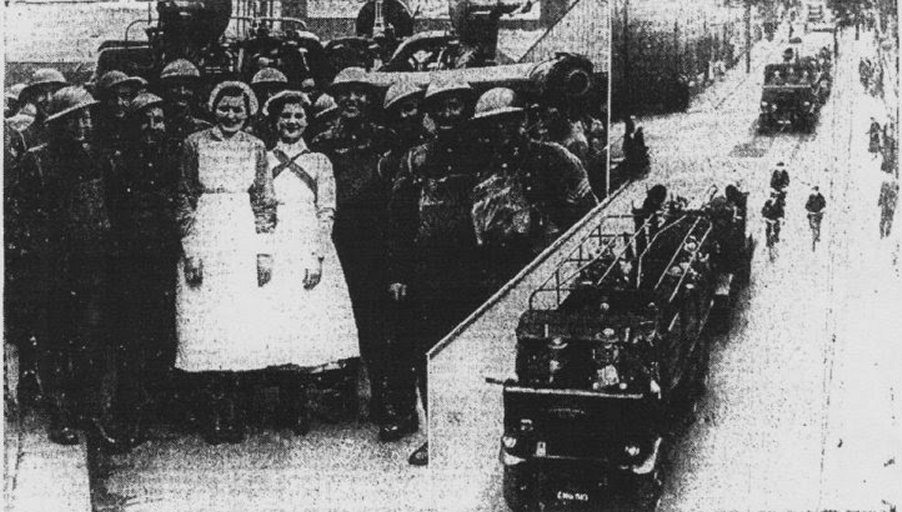 A 25 mile tour of the district resulted in several recruits responding to a drum head appeal for National Service. The route of the procession was lined by enthusiastic spectators forming crowds between 200 and 300 in each of the principal towns.

The Convoy assembled outside the Lord Conyers Hotel, Conisborough shortly after midday on Saturday. The field immediately behind the hotel was packed with gun trailers, army lorries, bombardier’s in khaki and uniformed Home Defence reservists. Directions were issued from a West Riding Constabulary police car through a loudspeaker with Mr G.O. Randerson, chairman of the Don Valley ARP Committee behind the microphone.

Gradually order was restored out of apparent chaos and after the arrival of several chairman and officials of the various local councils in private cars, the units took up their positions.

A recruiting v an brought up the rear and the staffs from several Exchanges assisted on the executive staff.

The route from Conisborough, was along Old Road, Church Street, Castle Hill, the Doncaster – Rotherham Road, through Denaby Main to Mexborough, finishing in Goldthorpe.

They were especially large crowds at Conisbrough, Denaby, Mexborough Market Place and all through the streets, Sandygate, Wath, and at Goldthorpe.

After thetour, which lasted over four hours and covered 25 miles, was completed they drove into the Welfare Hall grounds at Goldthorpe, and tea was served in the Welfare Hall.

In a brief address superintendent T.Gordon, who was introduced by Cllr David Sheldon, chairman of Conisborough Urban Council, said “we have been engaged in something this afternoon which doesn’t happen to our neighbours across the sea. We have come to ask a free people to offer their services to the State. If the people listen to the message that we bring them, then this event, which we fear, will never happen and we shall have given our services to the people to save them from the ravages of another war”

“We are still in need of a few more volunteers,” continued the Superintendent. “And we labour under a particular difficulty in this area as the majority of the wage earners are engaged in what are known as “reserved occupations.” Some of these people, however, could give a very welcome part-time service. We have had several recruits today and I should like to think that those people are the spearhead of an even greater force to come.”

Mr G.O.Randerson said. “We are still members of the greatest nation in the world, but this is a culmination of work that has been done by our forefathers and it is our duty to carry on that work and I’m looking forward to the results of this effort.”

While the parade was taking place around the district, seven Conisbrough Council employees under the leadership of Mr L.Sheldon, gave an effective decontamination display at Conisborough. They are in the course of being trained by Mr Pearson.

Seven Years In Forces – Then has to Register for National Service