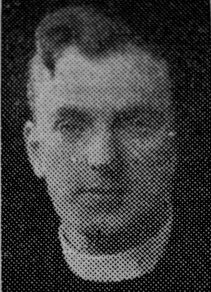 Conisbrough’s new Methodist minister, the reverent W Thynne, from Meltham, in the Holmfirth Circuit, took up residence during the weekend, and after preaching his first sermon in his new circuit at Oxford Place Church, Doncaster, on Sunday morning, conducted the evening service at the Wesley Methodist Church.

There was a satisfactory congregation. Mr Thynne, will succeed the reverent, P.T.Hutchinson, has been in the Methodist ministry for 14 years and was trained at Hartley College, Manchester.

He was later stationed at Bryn Mark (South Wales) where he had experience of a mining community, and at Church Stretton (Shropshire) before moving on to Meltham, where he has been for four years.

Mr Thynne, who will be attached here to the Oxford Place Circuit will have charge of the Conisbrough Wesley, Balby Alder Grove, Sprotborough Park, Bracewell and Wadworth churches.

A circuit welcome was extended at Oxford Place yesterday, and the members of the Wesley Methodist Church are planning to hold their welcome gathering in the near future.

Mr Thynne, who is married and has two young children, is especially interested in Sunday school work