No witnesses to drowning in canal near Mexborough 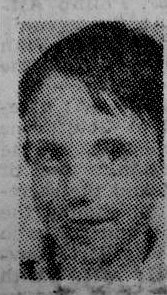 At a Mexborough inquest on Friday, Doncaster district coroner, Mr K.D.Potter recorded an” Open” verdict an eight-year-old Trevor Till, of Adwick Street, Denaby, whose body was recovered from the Sheffield – Keadby Canal, near Mexborough last Wednesday morning.

The coroner heard how on Tuesday, Trevor had accompanied his father, who had gone bathing close to the spot where his son’s body was later found. Trevor could not swim and had not gone in the water. He told his father he would not go near the water alone.

Mr Till said that Trevor could not swim had told his father he will not go near the canal unaccompanied.

Later in the day. Trevor went out, apparently intending to call for a friend, Brian Meggitt. His father intended to take the two boys to the local baths. However Trevor did not return and Mr Till thought his son had stopped at the house of his grandmother, Mrs Cordelia Till, on Doncaster Road, Denaby.Trevor stopped there occasionally overnight but quite often he grandfather would bring him home at about 10 o’clock.

Mr Till had started to worry at about 10.15. when his wife had been to her mother-in-lawÂ´s and found Trevor had left much earlier. The police had been called in about 11 p.m.

Pathologist Dr Elizabeth Travers said that Trevor appeared to have enjoyed normal health. His death was as a result of drowning.

Trevor’s grandmother Mrs Cordelia Till said that Trevor often came to their home. Trevor had come down on Tuesday and then asked if he could put his swimming trunks on ungreased trousers. Yet change in the kitchen and after asking for 3d had left.

Trevor had not said why he wanted to but Mrs Till said she had assumed he was going sun bathing.

“His sisters were sunbathing and I thought she was going to join,” she said.

I wouldn’t have let him have a strong son if I thought he had been going near the water,” she added.

Mrs Hannah Smith and Mrs Margaret Ester Newton had been for a walk past GrayÂ´s Bridge, where about 100 people had been bathing in the afternoon, but they told the , coroner at when they are passed by at about 830 and return the same way, just over half an hour later, there being no one either bathing or playing near the water.

Police Sgt S.A.Blackwood told the coroner that although extensive enquiries have been made in the area following the drowning, the police have been unable to find any witnesses or to trace anyone who seen Trevor since he was seen by grandmother on Tuesday.

Swimming was prohibited in the canal, he said, and since the incident, new signs had been erected at that spot.

Sgt Blackwood said that close to the place where Trevor’s body was found after dragging operations, there was a concrete ledge, covered by grass which grew right down to the water’s edge. Beyond the grass was a sheer drop of 5 feet into the water and he thought it was possible that the boy gone into the grass unaware of this.

Summing up, Mr Potter said, “There is no evidence after that of the grandmother as to what happened to the boy.”

It would be merely be surmising to guess what the boy had been doing after that, but Mr Potter thought he must’ve got into difficulties.

Referring to the “natural attraction” of the water Mr Potter commented, “This is another of those swimming tragedies which seem to come along with the hot weather.”

The spot was, he said, a “particular trap” for children and he added, “I would like to impress on parents the dangers of allowing children to go near this water unaccompanied.”

Children, he said, should be taken to the public baths and given proper supervision, to obviate the dangers of drowning.

He suspected that the drowning was misadventure but returned an open verdict.