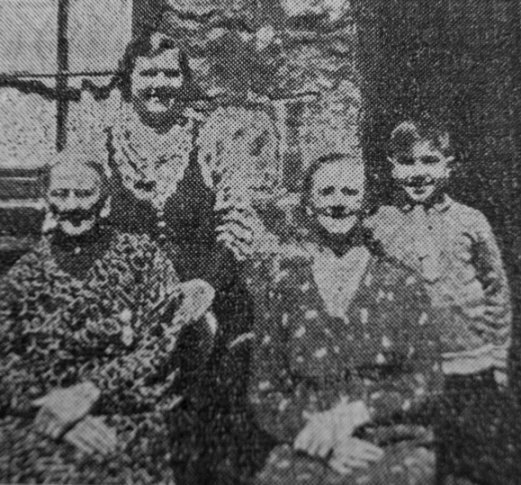 Here is Mrs Rowe, with representatives of three other generations of her family. Seated are: Mrs Rowe and Mrs Holmes (daughter), and standing: Mrs L. Dudhill (granddaughter) and Geoffrey Dudhill (great grandson).

To have lived in the same house 71 years is a proud record of Mrs Sarah Jane Rowe, an 82 years old Conisborough resident. And it is a house which, when it was erected set a new fashion.

In these days of cheap housing most people with matrimonial intentions like to embody in their future homes as many of their own ideas as possible, but, Mrs Rowe revealed to the “times” this week, such admirable desires were carried a stage further with the house in which she lives, for the whole of the stone for the building was actually quarried and shaped by her father, the late Mr George Streets (who had the house built) from its quarry at the crest of Conisborough Crags.

Today the house, known as Montagu cottage, Station road, Conisborough, situated near the Urban Council offices, which Mrs A.M.Holmes, a daughter of Mrs Rowe, is the caretaker, stands as firm as it did the day it was built and when a surveyor examined it recently. He said regretfully: “they don’t build houses like this any more.”

Mrs Rowe told our reporter that she was born in Booth´s cottages, near the Conisborough Vicarage, later renamed Kent´s Yard and her father at the time worked at the Levitt Hagg quarries as a stone getter and a lime burner, both jobs being combined in one operation in those days of crude machinery.

“My mother,” Mrs Rowe explained, “used to go and help father at his work and to make sure that we children were off to school clean and tidy and early. She used to hurry home, see to us and then go to work at the Conisborough Priory. Perhaps I had better explain that the Priory was what is now known as the Godfrey Walker Convalescent home. It was one of the finest houses in Conisborough, about the time I am speaking of, with its own gardens. Mr and Mrs Jennings used to live in the house and a later tenant was Mr Godfrey Walker.

At the Levitt Hagg quarries, the Stones and lime were taken to the River or the tip, as is done today and whereas today the work is done by an engine, in those days little donkeys driven by quite small boys were used.

“My mother never finished working and in a family of 12. I was supposed to have a reputation of being less hardy than any other member of the family, but then you see I’m 82, so I haven’t had a bad innings so far! I went to school in the Conisborough Moot Hall, somewhere about the site of the Conisborough Church Hall. It was a very long high building, surrounded by large glass windows and it had a large galley at the back of the benches for the children. The only other school in Conisborough, was a school up Clifton Hill. That was a boys school and it was kept by Mr Harris. “Bandy” Harris when he wasn’t looking. He was called “Bandy” because he was so short. Our school Mistress was a Miss Cudworth.

“After leaving school at the age of about 11 or 12 I worked for some time in the fields and when I was too big for that I went into service at a farm at Maltby. I was married at Doncaster and my husband Mr Harry Charlesworth Rowe died 28 years ago.

“I can remember quite clearly when there were no houses after you left The Dale at Conisborough until you arrived at a farm where the Reresby Arms Hotel stands now at Denaby. Waggonettes used to run from somewhere against Denaby colliery, but the largest of them you to set off from the old Star Hotel at Conisborough. Conisborough Feast was a great event for the village. It was associated with the “status” day when the local farmers walked round an enclosure looking for likely lads to hire on their farms. I don’t remember the “status” days, but I can remember the feast stalls strewn about the sidewalk by the Eagle and Child Hotel. When the Feast came, the yard of the Hotel was turned into a peepshow.

“Conisborough, had many farms then. There was one where the Council depot is now, near the police station, yet another where the picture Hall is now. A third used to be situated near the entrance to the Parish Church.

Mrs Rowe has a fund of memories of old Conisborough and she added that she was extremely sorry to see the closing down of the firm of Messrs Kilner brothers limited, the glass manufacturers. She had watched its growth from the beginning and even remembered picking flowers on the site before the land was disturbed for the foundations.

Mrs Rowe, who is quite lively for a age is in the full possession of all faculties, has three great-grandchildren, 20 grandchildren and six children.

Death of An Old Denaby Octogenarian – A Life Spent In The Soil.

Denaby Youth who Lived for Nine Years with a Broken Back