Conisbrough Methodist Church was to be the scene of a presentation on Tuesday evening to the townships five recently announced Queen’s guides.

Mr Davies will be making the official presentation, but the guides have in fact already received their Queens Guide badges so that Suzanne, Kathleen, Patricia and Maureen could wear them when they accompanied a party of 24 Guides and eight guiders on a holiday in Switzerland, from whence they recently returned.

During their 10 days holiday, the girls, led by District Secretary Mrs S Wallwork, stayed at Brienz and visited one of the World Guide Shallots at Adelboden.

District Commissioner Mrs V Webster, who also accompanied the group, commented on Tuesday, “it is really thanks to Mrs Wallwork that they had the trip, because she did a first-class job of organisation.”

Previously district Guys have never been abroad, although they have visited London. The enterprise of this trip is evident from the fact that from the whole of the West Riding last year only 50 Guides were taken overseas compared with a 32 made this trip 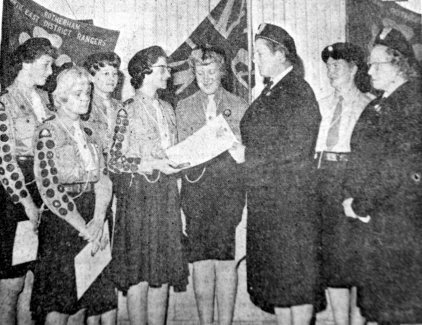