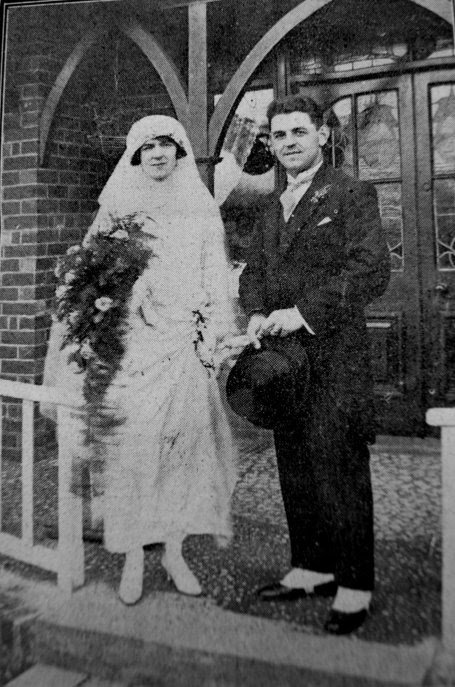 On Tuesday a pretty wedding which aroused a good deal of interest took place at St. PeterÂ´s Church, Conisbrough, he Rev. W. A. Strawbridge, M.A., officiating, the parties being Mr. Percy P. Taylor, of Brunswick Villas, Balby, and Miss Gladys Mary Watson, elder daughter of Mr. and Mrs. Watson of “Brayton” Park road, Conisbrough.
Prior to the arrival of the bride at the church. Mr. Kilner Bateson played appropriate music on the organ and the church bells were rung.
The service was choral, the hymns being; “The voice that breathen OÂ´er Eden,” and “Lead us Heavenly Father Lead us”.

The bride, who was given away by her father, was daintily attired in a gown of white satin charmeuse, with lace trimmings and pearl embroideries.

She wore a veil and wreath which was kindly lent for the occasion by Mrs. P. W. Watson, and a string of pearls, the gift of the bridegroom. She carried a bouquet of cream roses and white heather.

Her attendants were Miss Jessie Price, cousin of the bride and Miss Margaret Watson, sister of the bride. They were attired in embossed crepe-de-chine in rose and biscuit respectively and wore black lace hats. Each had a string of pearls, the gifts of the bridegroom, and they carried sheaves of pink and white carnations.

The duties of best man were capably carried out by Mr. W. Goldsworthy Jones, of Doncaster, and the groomsmen were Mr. P. W. Watson and Mr. A. W. Watson; the brothers of the bride.

The brideÂ´s mother wore a dress of grey French poplin with mauve stripes and mauve hat to match, the dress of the bridegroomÂ´s mother being of black satin charmeuse with grey trimmings and hat to match.

The happy pair left the church to the strains of “The Wedding March”, and to the joyous accompaniment of the church bells.

After the ceremony a reception was held by the bride’s parents at their residence on Park road.

Mr. and Mrs. Taylor then set off by motor for London and Bournemouth where the honeymoon is being spent, after which they will reside in Doncaster. The bride travelled in a tailored suit of grey gabardine with jumper and hat of royal blue and fox fur.