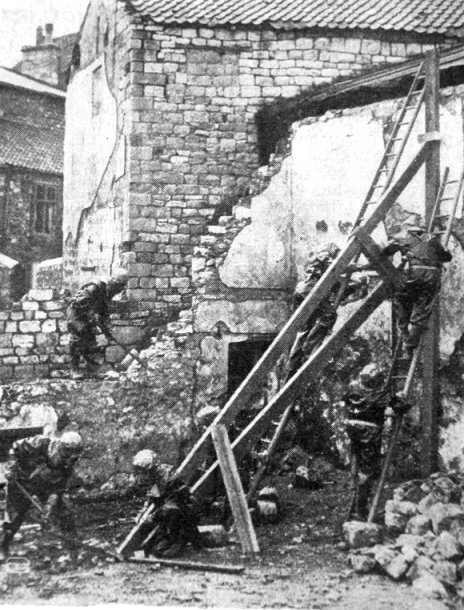 “It’s an ill wind…” says the old adage, and it was particularly applicable at Conisborough on Saturday morning, when the Conisborough A.R.P. rescue and repair and rescue and demolition squads gave their first public practical demonstration of what their work in an emergency would entail.

The demonstration was staged on the old Kent,s yard site near the Conisborough Urban District Council depot, and although the derelict houses and piles of debris from the breakers hammers may not be pleasing to the eye, the location was ideal for the demonstration.

Under the direction of Mr E.N.Pearson, civilian anti-gas instructor for the Don Valley, the repair squad, equipped in full service Kit of rubber knee boots, gas proof overall, yellow coats, respirators and huge gauntlets, gave an exhibition of “shoring” the bomb weakened wall of a house by placing one set of timbers paralleled to the masonry and then placing a second baulkto support it.

The work was completed in about 4 min for each section of the “shoring” the workers add to rely on prearranged signals from their leader (Mr H.Ashley), who was distinguished by his red armband, as ordinary conversation could not be heard through the mass and the folds of gas proof holds.

The second stage in the demonstration consisted of the rescue of a civilian from beneath a pile of stone blocks weighing about half a hundredweight each. The “badly injured” man, Mr Tom Shelton, a Conisborough Council work man, shook hands solemnly with his friends, and then inserted himself into a deep depression in the stones. The stalls were cunningly supported by concealed timber, but the effect was so realistic (assisted by the agony displayed on Mr Shelton’s face) that many new arrivals on the scene were under the impression that if feverish attempt will be made to release a work man injured by falling wall, and would have cheerfully given their assistance if they had not been restrained. 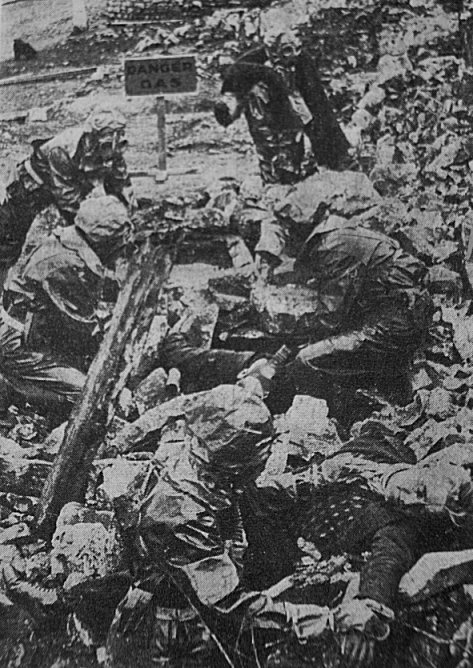 Medical attention was also given to Mr G Harrison, was “trapped” in the street without his respirator, while Mr J Maughan had to be carried by the rescue squad quite overcome by the heavy concentration of gas. He had “defy” the “Danger Gas” notices which were prominently surrounding the affected area.