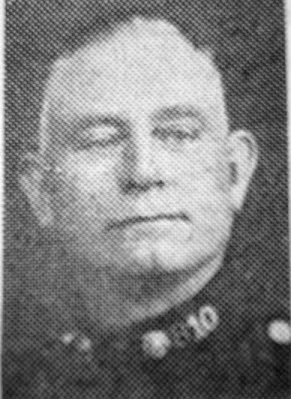 Denaby has lost a popular and conscientious police officer by the retirement this week of P.C. M. H. Yeomans of Stratforth Terrace.

Mr. Yeomans, a native of Desborough (Northants), joined the West Riding Constabulary shortly after the outbreak of the Great War, and was stationed at Morley, but in 1915 he joined the Army Service Corps and served in Egypt and Palestine for four years, attached to the 22 mounted Brigade as a farrier.

After demobilisation in 1919, Mr Yeomans returned to the West Riding Police and was again stationed at Morley. Later he was at Pateley Bridge, and at Braithwell (for 11 years), before being transferred to Denaby four years ago.

P.c. YeomanÂ´s favourite sport is bowls and he has played in numerous competitions organised by the Constabulary. In 1925 he won the Doncaster Divisional competition and in the same year was also a member of the team which first won the Hallat Cup open to divisions of the West Riding Police and was presented with a gold medal by the late assistant Chief Constable, Mr. H. Haigh.

Mr Yeomans, when at Braithwell, was a member of the Edlington Corps of the St.Johns Ambulance Brigade. He and his wife are to spend their retirement at Old Mill Road, Conisborough.