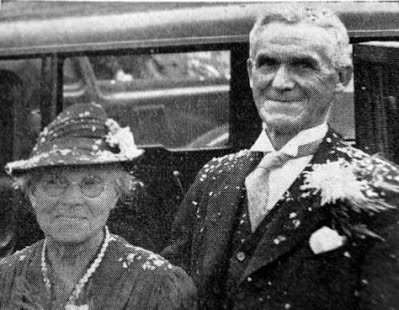 A large crowd gathered at the doors of Conisborough Parish Church on Wednesday for the wedding of a septuagenarian Conisborough couple. Mr. David Warren (75) and Mrs. Ada Warren (74), of 14, Old Road, and after the ceremony performed by the Vicar, Canon H. T. Eddershaw, was over, the bridegroom his face wreathed in smiles, his figure as upright as that of a man many years younger, a flower in his buttonhole, proudly led his bride into High Street, where they posed for a special picture by their waiting motor-car.

They had cheerily met a barrage of confetti.

The bride , who was given away by her eldest son, Mr. James Warren of Dearne Street, Conisborough, was dressed in navy blue with a navy blue hat and shoes and white gloves, and she carried an ivory-backed prayer book, the gift of her eldest son. She was attended by a friend, Mrs. Brooksbank, of March Street, Conisborough, who was also in navy blue, and after the ceremony a reception was held at Mrs. WarrenÂ´s home, where about 20 guests were received.

Mrs. Warren, who has lived in the same house in Old Road for 48 years, told the “Times” on Tuesday that she had known her bridegroom for 50 years. He had six grown-up children and when the only unmarried son joined the Army in May, Mr. Warren senr. wrote to ask if he could come and stay with her. Mrs. Warren herself has five children, all married, but she has been a widow for 25 years.

Mr. Warren, a widower, who celebrated his Golden Wedding last year was formerly a well-known local preacher and resided at Hoyland before going to Conisborough. He retired about five years ago from employment at Elsecar Colliery.