Conisborough, Cliff Companies Quarry at Butterbusk on Friday handled its biggest fall ever. In one single blast 60,000 tons of dolomite, with a slight lacing of Earth and subsoil, was brought down by 6000 lbs of “sabulite” explosives lowered in 25 lb cartridges to the bottom of a number holes 6 1/2 inches in diameter and 75 feet in depth. The fall extended over a face of 96 yards with a height of 75 feet. 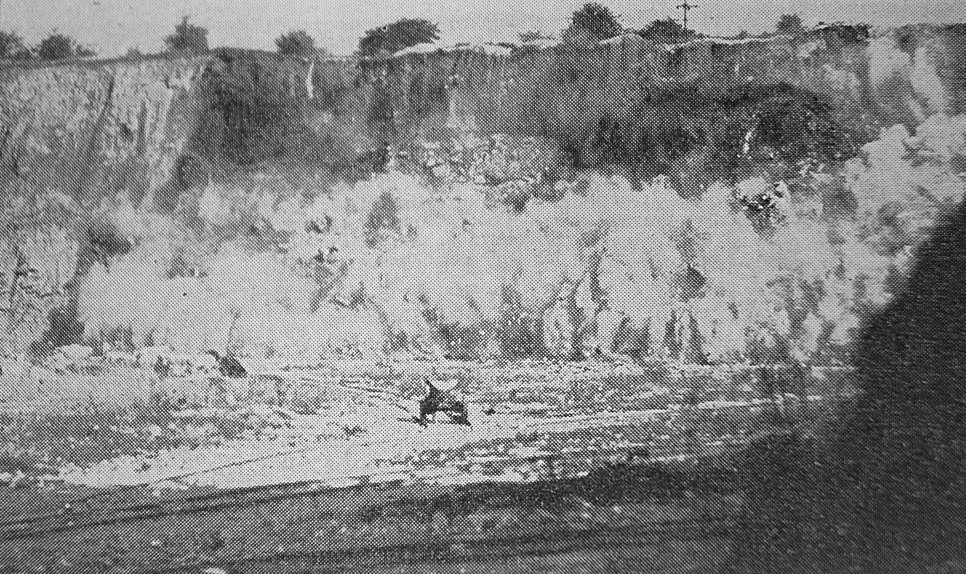 Final preparations before the big bang lasted more than 24 hours and although the fall was timed for the end of the normal working shift, the majority of the workers stayed behind in the quarry in order to get a “front Row” view of the fall. It was worth it.

In one second the cliff face rose scarred and white in the afternoon sunlight, crowned here and there with pinnacles and promontories and then with a noise like thunder huge splits appeared as the high explosive dissolve the rock as if it were shifting sand. The mass seem to hiding in the air for several seconds before the base of the fall collapsed and the top killed away in a mushroom of dust and powder – smoke which curled up and revealed the mass of broken boulders some of which measured many hundreds of feet across.

The blast of the explosion caused the cliff on which our party were perched, writes a “Times” representative, to tremble violently and large boulders were hurled many hundreds of feet almost to the workmen who had withdrawn to a safe distance. A fault in the composition of the cliff face strangely enough left a rocky prominence jutting out over the depths and resembling the face of an old man, complete with a beak like nose and chin.

Before the explosion occurred lines were drawn up to places at which it was estimated the fall would finish its course and in nearly every case the estimations were accurately determined to a foot. Wires were connected from the explores if deep in the base of the cliff to a small battery, and a plunger which brought the explosives into effect was operated by Mr Charles Bradley. The Quarry Foreman is Mr P Shields.

The signal for the fall was given by Mr J R Middleton – Walker, general manager of the company, who supervised the laying of the explosive and estimated the tonnage obtained by the fall. It was learned that not more than 2 % of the fall would be wasted.

Could not Sound Siren.

It is usual to sound a warning signal by means of the Quarry Siren, but this practice had to be abandoned on this occasion on account of the air raid warning prohibitions and instead a hand signal was given. The employee stood away in safety in the depths of the Quarry

The wells in which the explosive was placed were bored by a drilling machine which not only excavated through the solid rock, but powdered its excavation as smoothly as if the rock had been chipped by a stone mason. 15 holes were bored at places about 18 feet from the edge of the cliff and Mr Bradley, who manipulated the machine, told the “Times” that he first began boarding on April 14 and concluded his work in that direction on June 15.

The fall, which will take about six months to clear, consisted for the greater part of dolomite, used mainly in lining the interiors of steel furnaces. The huge boulders are ground into blocks of several grades and are baked in the kilns at the works until they are up to the required strength.

Wilful Damage at a Conisbro’ Quarry.

What He Got For “Peaching.” – The Accident in a Conisborough’ Quarry.