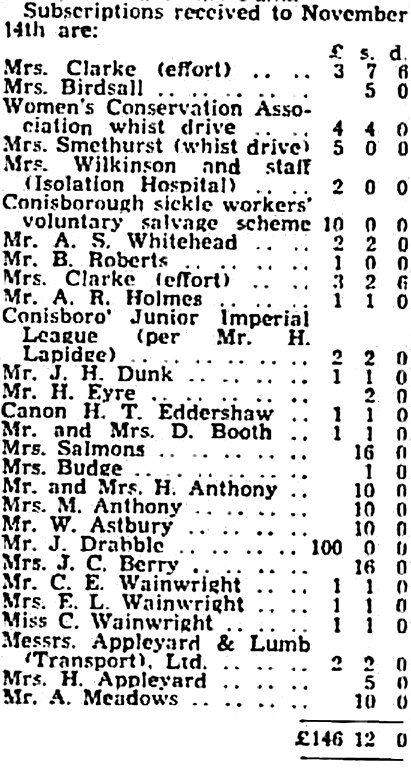 The Conisborough and Denaby Spitfire Fund has made a splendid start, as the list of subscriptions given below shows, and a very useful sum should be handed to Lord Beaverbrook when the effort closes at the end of the year. A novel offer has been made to the Fund by Mrs Smethurst of The Bungalow, Conisborough, which will arouse interest and should be the means of adding a useful sum to the total already subscribed.

At this weeek´s meeting of the committee it was reported that Mr. J. Drabble, the Conisboro´ confectioner, had generously promised £100 to the Fund and the hope was expressed that the munificence of Mr. Drabble would lead others to follow his noteworthy example.

The secretary, Mr. A. R. Holmes, stated that efforts were being made to secure a Messerschmitt fighter for show in the area and the commander of the Conisborough Home Guard, Capt. J. Middleton Walker, said that he would arrange for the machine to be guarded by members of his company should the effort materialise.

It was reported that a concert was to be held at the Northcliff Club next Friday in aid of the Fund.

Any More Offers?  For Conisborough and Denaby Spitfire Fund