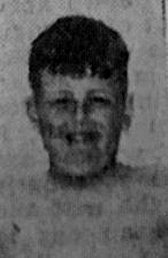 Ian Collins, eight years old son of councillor and Mrs K Collins, of 80, Tickhill Street, Denaby Main, has again been successful in a competition held at Butlins Holiday Camp at Skegness for a “Boy Tarzan” in the group up to 8 years.

He has been spending two weeks holiday with his parents in the first week he won first prize in the competition and a second week second prize.

This is a fourth successive year in succession in which he has been successful in gaining first place and he has again won a free holiday for one week at any of the Butlins Camps or hotels.

In addition he went to set-top pens and pencils was made “captain” of the team and was called on to receive the cup for the winning team. Ian was nine on Sunday.

In Line for The Big Prize- Glamourous Grandmother (picture)