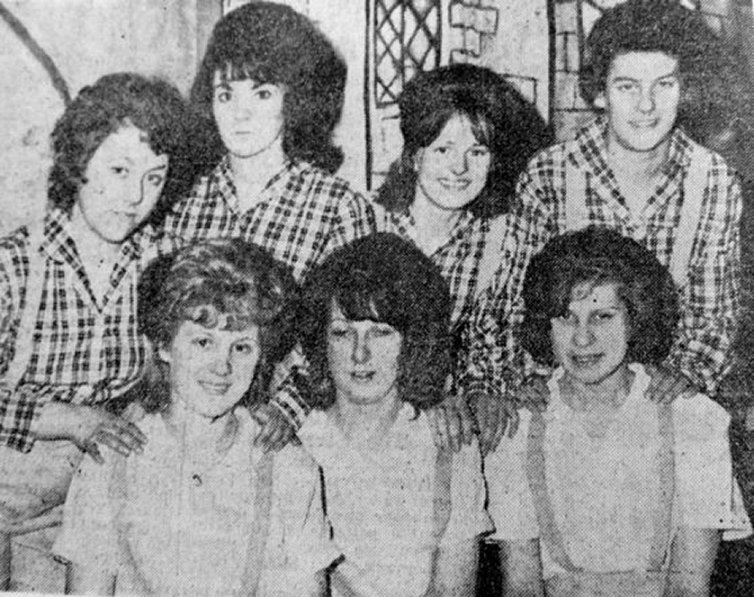 Six months of learning lines in cute, hammering, screwing, daubing sticky paint and dry campus, cutting, selling, fitting and generally tackling the million and one other jobs which face any amateur theatrical company, came to a climax on Monday evening the opening of the Denaby Tom Hill Use Centre pantomime, “Princess Christaline”

A great deal of hard work has gone into the presentation – their 15th annual panto! – Which, for the second successive year was specially written for the club by producer and choreographer, Mr Eric Smith, proprietor of the Conisbrough Elm Green School of dancing.

In amateur circles – not “amateur” in any derogatory sense – the best way to judge a production is from audience reaction, for if they enjoy themselves one can’t ask for more._The 50 or more. Club members who were involved can be well satisfied.

There were faults, but none was disastrous. Most of them can be put down to lack of confidence, and will be cured by time and sheer repetition of lines and movement.

It was pleasing that almost every word, spoken or sung, could be heard, even at the back of the hall. All the cast are to be congratulated for this and for the fact that after initial nerves they kept the pace moving along briskly.

In this they benefited a good deal from Eric Smith’s talent. He managed to strike the right measure between song, dialogue and slapstick. His production and choreography were praiseworthy and were given full significance by enthusiastic performers.

Praise two for Youth Centre Leader Mr John Smith and his wife, who together supervise the manufacture of all the scenery and most of the costumes. The result was no less than “professional”

Mention was made of individuals from the cast, but that is not to belittle the work of everyone else.

Eunice Gwatkin (John Fairfax) could have made the pantomime worthwhile with her lovely solos, Lynn Hunsley (Princess Christaline) was a charming heroine with a delicious smile.

Eric Smith himself stepped in as Dame Trott at the last moment, and was a great success.

Wilfred Reville (Ping), Stephen Duffty (Pong) and John Higgins (Basil the Bailiff) made light work of the slapstick, especially towards the end when they enlisted the aid of the audience. They were ably assisted by the two halves of the horse, John Davies and Brian Rowe. Well done also Malcolm Holden (Count la Roche), Jennifer Wolstenholme (Susan), John Taylor (Sammy), Keith Mincher (Duke of Rubovia) and Ingrid Hutley (Gypsy).