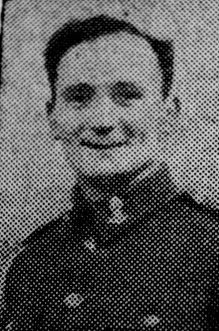 Trooper Sgt Maj G.A.Teece, of 23 , Athelstane Road, Conisbrough , has seen service in India and is at present with a light anti-aircraft unit in this country . He has seen7 years Army service and five as a reservist .
He was a senior Sergeant when war broke out, and was promoted sh

ortly afterwards. He is a member of the Health and Strength League, and in India was physical training instructor to the troops