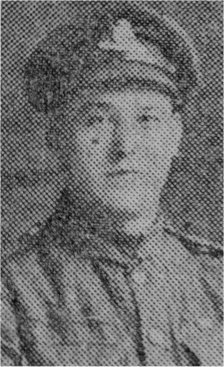 son of Mr and Mrs John Worth, Denaby main, was killed in action in France on September 18. He enlisted on June 17, 1915, and was awarded the military medal for bravery at Passchendaele in October 1915.

During the incident which gaind him distinction he took charge of a gun after his officer have been killed, and by keeping it in action held the enemy at bay.

While in France he also earned a certificate of proficiency in the construction of dugout and gun pits. Whilst home on leave last March he received from the committee of the Denaby heroes fund, a gold watch and illuminated address, in recognition of his heroism. He was estimable young man, greatly respect in Denaby and the neighbourhood.

“I have just received your letter regarding your son, and am only too sorry to have to tell you that the news is true. The late captain of this battery wrote you, I think, telling you the circumstances, but possibly you did not get the letter. Your son was killed while moving up to the battery position. He was killed by a big shell, and must have had an instantaneous death. He was going through a village on his way to the battery, with ammunition. I’m afraid there is not much in the way of consolation to offer you at a time like this.

Believe me, I understand the greatness of your last, and it can only lessen the blow slightly but tell you that Cpl Worth was a very good non-commissioned officer, and what is more important still, a good fellow, respected by officers and men alike, and is a great loss to me as captain of the battery, and to his O.C.major Leete, who bids me send you is deepest sympathy.”

Cpl Worth was a grandson of Mr Thomas Weston, of Warley near Birmingham, formerly of Denaby and Mexborough