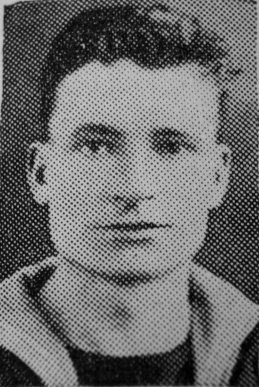 Conisborough had a representative in the decisive battle with the Graf Spee in Leading-stoker W. B. Wright, eldest son of Mr. and Mrs. R Wright, of Dearne Street, who was on board one of the British cruisers and last week his parents received a cable from him stating “All is well. Best love. Merry Christmas”.

Mr. Wright told the “Times” on Monday that he had posted a little message in reply. Leading stoker Wright, who is 29 had had more exciting experiences than most men can get in a life-time. Last January while on the same cruiser he missed death or injury by only 48 hours.

His vessel had been stationed at Concepcion (Chile) and the men had been allowed on shore for a short leave. Leading-stoker Wright had been staying in a Hotel and had then returned to his ship which moved off to Valparaiso, but the boat had only been stationed in port a very short time when there was a terrific upheaval. The boat shivered from stem to stern and although enquiries were made they were unable to find out what had happened as all lines of communication had been severed.

They were certain that something terrible had happened and their forebodings were correct, for they learnt that at Concepcion an earthquake had occurred with the loss of several hundreds of lives. One of the buildings razed to the ground was the hotel in which Stoker Wright had slept.

As soon as the news was received the ship got under way and did splendid work evacuating injured and children to Valparaiso.

Stoker Wright has also visited the island known as Juan Fernandez, popularly assumed to be the island upon which Robinson Crusoe spent his exile, and there he met a man engaged in supervising stores. The man turned out to be from the Doncaster district and had served his term of enlistment with the Navy and then decided to remain at Juan Fernandez. The island is many hundreds of miles from the nearest land and the amazement of the “two Yorkshire lads” can be imagined. It afterwards transpired that the supervisor had worked at Brodsworth Main Colliery when sinking operations had first been put in hand.

Stoker Wright whose ship also had the distinction of sinking the first enemy ship in the present, has also served on H.M.S. York. He is well known in Conisborough and in acknowledgement of his presence at the River Plate action, two Conisborough men, Coun. F. Kelsall and Mr. H. Fenn, both of whom served in the Navy in the last war, are organising a fund to send cigarettes to members of the Navy in South American waters.